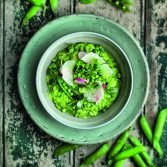 As part of WWF’s Earth Hour, chefs are contributing an array of veggie recipes. Starting as a symbolic lights out event in Sydney in 2007, Earth Hour is now the world’s largest grassroots movement for the environment, inspiring millions of people to take action for our planet and nature.

Fresh, sweet peas combined with the luxurious fat grain of the rice makes for an exceptional spring dish, with just enough heartiness if the weather isn’t yet that warm. The variety of pea I chose for this dish was Feltham First, which is a long-standing British favourite – a low-growing, early variety that produces lovely sweet, but not too sweet, peas. Rather than using a vegetable stock, I wanted to try making it just with the pea pods to intensify the flavour – and also because I never forget my mother’s mantra, ‘thou shalt not waste’! But during this process I discovered something very interesting. The first time I made the stock I chopped and puréed the raw pods and then added water – but the taste, oh it was horrible – soapy and bitter! Intuitively I thought it must be enzymes within the flavour compound, so I tried again and this time I blanched my pea pods in boiling water for about 40 seconds, hoping to remove the bitterness. I cooled them down, chopped and puréed them, then I made my stock. And it worked like a dream; it had a beautiful clean pea flavour. Yet, I wanted to know exactly why this chemical reaction had happened. I contacted a wonderful scientist friend, George Oakland, who did some research and discovered that the culprit was the flavour/aroma compound, pyrazine. It is also found in some wines, such as Sauvignon Blanc and some Bordeaux.

Pea pods contain quite a lot of pyrazine and its harsh flavour was coming through in the cooking process. By blanching the raw pods for just 40 seconds, you neutralise the compounds. I still find it so fascinating and extraordinary that one small process can change the flavour so completely.

*Chef’s note: I developed this technique of cooking a risotto as a means of saving time. I hated watching my chefs spend so long stirring the rice. My method requires less time and effort but every grain of rice is perfectly cooked. Those last 5 minutes are crucial. By stirring you work the starch and extract it, which is what gives the risotto its hallmark creaminess.

Recipe extracted with permission from Raymond’s latest book Kew on a Plate, published by Headline Home. 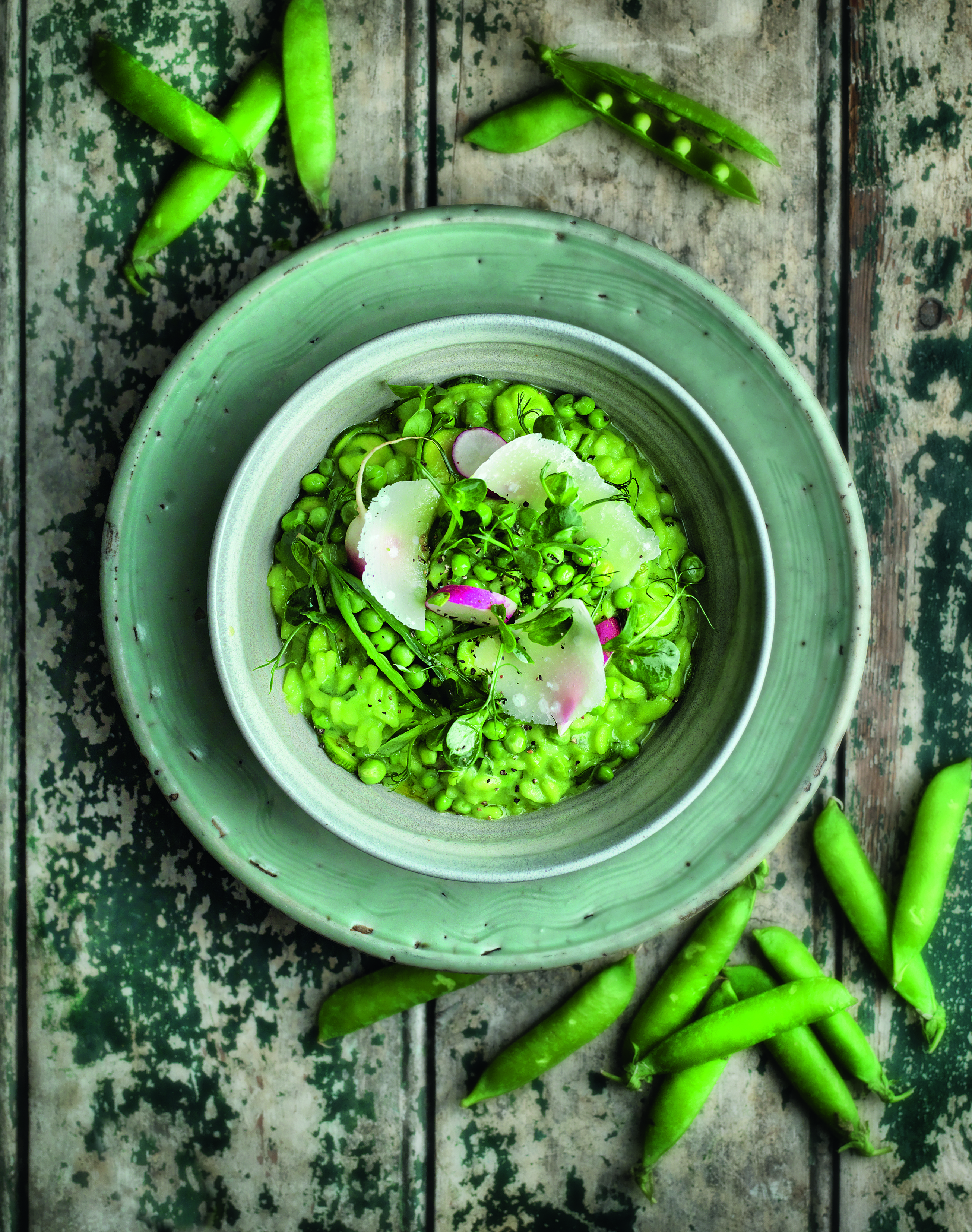 350g fresh pea pods, shelled (use the shells for the stock and the peas for the purée and vegetables) & 350ml iced water

For the pea purée:

1
Start by making the pea stock, in a large pan of simmering water, blanch the pea pod shells for 1 minute. Using a slotted spoon, remove the blanched shells and refresh them in the iced water. (By refreshing the pods in the iced water you not only retain the colour but also the freshness and maximise the retention of vitamins and nutrients.)
2
Once cooled, blitz the iced water and blanched pea pods in a food processor until smooth and strain through a fine sieve. Set aside 100 ml to make the pea purée and the remaining 500 ml to make the risotto.
3
Next, make the pea purée. In a small saucepan on a medium heat, sweat the peas in the butter for 5 minutes, adding a pinch of salt. Add the 100 ml of reserved pea stock, bring to a boil and simmer for 4 minutes. Transfer to a blender or food processor, blend until smooth and leave to cool.
4
For the risotto, in a medium saucepan on a low heat, sweat the onion in the olive oil with a pinch of salt for 2 minutes, until translucent. Add the garlic. Stir in the rice and continue to cook on a low heat for 3 minutes, until the grains of rice appear shiny (this will give flavour and prevent them sticking together).
5
Pour in the white wine, then the 500 ml of reserved pea stock, stir and bring to the gentlest simmer with only one bubble breaking the surface every minute. Season with salt and pepper then cover with a lid and leave to cook for 20 minutes. Check every now and again that it is not boiling.
6
After 20 minutes of cooking, pick up a grain of rice. You will see a tiny speck of white starch in the middle – this means the risotto is nearly cooked. Now you need to add the creaminess that we love so much in a risotto and that means 5 minutes of hard and fast stirring. By beating the rice, each grain will rub against another, which will extract the starch and give the rice its beautifully creamy consistency. Stir in 200ml of the cooled pea purée, which will revive the colour and add freshness. Stir in the Parmesan, taste and correct the seasoning. Set aside.
7
Prepare the vegetables. In a small saucepan on a high heat, bring the butter, 50 ml of water and a pinch of salt to the boil. Add the courgettes, cover with a lid and cook on a high heat for 30 seconds, then add the peas, radishes, radish tops and spinach, cover again and continue for 20 seconds.
8
To finish the risotto, stir in the lemon juice, olive oil or butter and maybe a dash of white wine to sharpen the flavour. Taste and adjust the seasoning. You can serve the risotto in a large dish topped with the vegetables, blanched pea shoots and a few shavings of the vegan hard cheese, if using, or in four large bowls.
Categories:Main Courses
jvs 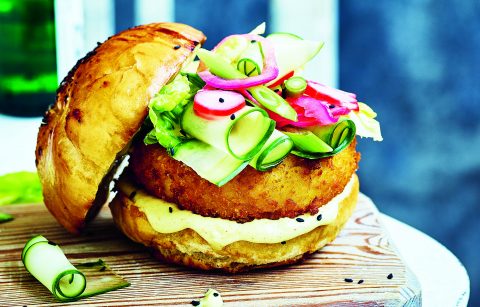 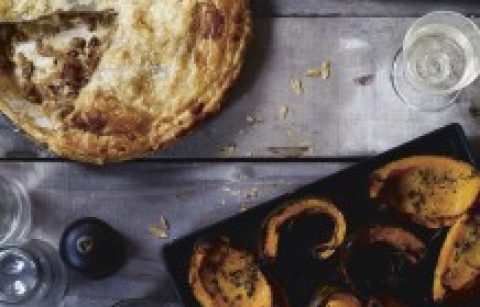 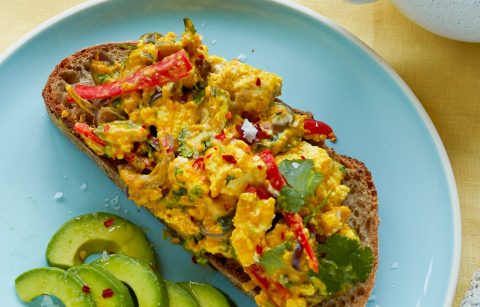