Judaism and veganism go hand in hand. Included in their common ideals are kindness to animals, promotion of other mitzvot, the way of life before Noah and aspiration for the future.

Consideration for the well being of animals features in several Torah commandments. For example,

“If thou see the ass of him that hateth thee lying under its burden, thou shalt forebear to pass by him; thou shalt surely release it with him” (Exodus 23:5)

“Thou shall not muzzle the ox when he treadeth the corn” (Deuteronomy 25:4)

As Rabbi Dr Joseph Hertz notes in his commentary on this verse, “This prohibition applies to all animals employed in labour, and not to the ox alone. …It is a refinement of cruelty to excite the animal’s desire for food and to prevent its satisfaction.” ((Rabbi Joseph H Hertz, The Pentateuch and Haftorahs, London Soncino Press, 1981 (Second Edition), p. 854.))

In the Ten Commandments it is stipulated that animals as well as people are to rest on the Sabbath day: 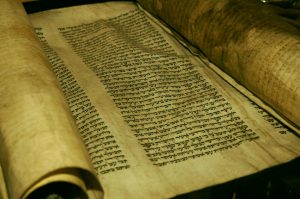 Maimonides, the pre-eminent Torah scholar and Jewish philosopher of the Middle Ages, points to animals’ capability for feeling pain and anguish when he writes, “It is prohibited to kill an animal with its young on the same day, in order that people should be restrained and prevented from killing the two together in such a manner that the young is slain in the sight of the mother; for the pain of animals under such circumstances is very great. There is no difference in this case between the pain of people and the pain of other living beings, since the love and the tenderness of the mother for her young ones is not produced by reasoning but by feeling, and this faculty exists not only in people but in most living creatures.” ((Guide for the Perplexed, 3:48.))

Examples of more recent expositions of the requirement to care for animals are:

“It is forbidden, according to the law of the Torah, to inflict pain upon any living creature. On the contrary, it is our duty to relieve pain of any creature, even if it is ownerless or belongs to a non-Jew.” ((Rabbi Solomon Granzfried, Code of Jewish Law, New York: Hebrew Publishing Co. 1961, Book 4, Chapter 191, p. 84.))

“… G-d’s teaching, which obliges you not only to refrain from inflicting unnecessary pain on any animal, but to help and, when you can, to lessen the pain whenever you see an animal suffering, even though no fault of yours.” ((Rabbi Samson Raphael Hirsch, Horeb, Chapter 60, Section 416. ))

Indeed, Jewish tradition is filled with compassion for animals and many commentators, drawing on the statement, “A righteous man regardeth the life of his beast” (Proverbs 12:10), argue that it is impossible to be righteous if one is unkind to animals.

2. Support for other mitzvoth:

Jewish Law requires us to give food to the hungry, protect the environment, conserve natural resources and preserve human health. In each case, vegetarianism accords with the requirement and meat eating practices conflict with it.

3. Giving food to the hungry:

In the Passover Haggadah we read, “This is the bread of affliction which our ancestors ate in the land of Egypt. Let all who are hungry come and eat”, and the Talmud states that “Providing charity for poor and hungry people weighs as heavily as all the other commandments of the Torah combined” (Baba Batra 9a).

Jean Mayer, a leading twentieth century expert on hunger issues, showed how vegetarianism can help fulfil the above when he estimated that if people reduced their meat consumption by just 10 percent, enough grain would be released to feed 60 million people. Read more >

The Talmud asserts that people’s role is to enhance the world as “co-partners of G-d in the work of creation” (Shabbat 7a) and the following refers to the effects of our actions on future generations:

“Consider the work of G-d; for who can make that straight, which He hath made crooked?” (Ecclesiastes 7:13)

The Midrash on this adds: “In the hour when the Holy One, blessed be He, created the first human being, He took him and let him pass before all the trees of the Garden of Eden and said to him: ‘See my works, how fine and excellent they are! Now all that I have created, for you have I created it. Think upon this and do not destroy and desolate My World, for if you corrupt it, there is no one to set it right after you.’” ((Midrash Rabbah, commentary on Ecclesiastes 7:13.))

However, a 2006 report by the United Nations Food and Agriculture Organization (FAO), stated that animal agriculture is “one of the top two or three most significant contributors to the most serious environmental problems, at every scale from local to global”. ((Steinfeld H et al, Livestock’s Long Shadow: Environmental Issues and Options, Food and Agriculture Organization of the United Nations, Rome, 2006.)) Modern meat production causes environmental and ecological damage via substantial energy outputs as well as the emission of climate changing gases. The FAO estimates that livestock production is responsible for up to 18 per cent of global greenhouse gas emissions ((ibid.)), while more recent estimates put the figure as high as 51 per cent ((Goodland R and Anhang, J, Livestock and Climate Change, World Watch Institute, November/December 2009.)). Read more >

In the Psalms it is written:

“(You [G-d]) … Who sendeth forth springs into the valleys;
They run between the mountains;
They give drink to every beast of the field,
The wild asses quench their thirst.
Beside them dwell the fowl of the heaven,
From among the branches they sing.
Who waterest the mountains from Thine upper chambers;
The earth is full of the fruit of Thy works.
Who causeth the grass to spring up for the cattle,
And herb for the service of man; To bring forth bread out of the earth” (Psalms 104:10-14)

The harmony of vegetarianism with these sentiments is emphatically illustrated by the statistical estimate that 634 gallons of fresh water are required to produce a single beef burger. ((Hoekstra AY and Chapagain AK, Water footprints of nations: Water use by people as a function of their consumption pattern, Water Resource Management, 2007, 21(1), pp. 35–48.)) In short, reducing meat consumption saves water. Read more >

In the Mishneh Torah, Miamonides stated:

“Since maintaining a healthy and sound body is among the ways of G-d – for one cannot understand or have knowledge of the Creator if one is ill – therefore one must avoid that which harms the body and accustom oneself to that which is helpful and helps the body become stronger.” ((Mishneh Torah, Hilchot Deot 4:1.))

That a reduction in meat eating contributes to good health is shown, for example, by a recent study carried out at Oxford University. A key finding was that eating meat no more than three times a week could prevent 31,000 deaths from heart disease, 9,000 deaths from cancer and 5,000 deaths from stroke, as well as save the NHS £1.2 billion in costs each year. ((Healthy Planet Eating, Friends of the Earth (Oxford University British Heart Foundation Health Promotion Research Group), October 2010.)) Read more >

Vegetarianism and the original intention:

Many leading Jewish commentators throughout the ages have held that G-d originally intended human beings to be vegetarian. They argue that the permission to eat meat given to the generation of Noah after the flood was only a temporary concession. (Rabbi Isaak Hebenstreit believed that meat eating was sanctioned because of the conditions after the flood when all plant life had been destroyed ((Rabbi Isaak Hebenstreit, Graves of Lust (Hebrew), Resnow, Poland, 1929, p. 6.)) and it suggested that it was a concession to human weakness, to ward off the possibility of cannibalism at a time when people had degenerated spiritually ((Rabbi Samuel H Dresner, The Jewish Dietry Laws, Their Meaning for Our Time (New York: Burning Bush Press, 1959), pp. 21-25.)).)

The belief that we were originally meant to be vegetarian is largely based on the following verses from Genesis:

The following are examples of commentaries on the above verses.

Nachmanides (1194-1270): “Living creatures possess a moving soul and a certain spiritual superiority which in this respect make them similar to those who possess intellect (people) and they have the power of affecting their welfare and their food and they flee from pain and death.” ((Nachmanides, commentary on Genesis 1:29.))

Rabbi Joseph Albo (died 1444): “In the killing of animals there is cruelty, rage, and the accustoming of oneself to the bad habit of shedding innocent blood…” ((Sefer ha-Ikkarim, Vol. III., Chapter 15.))

Moses Cassuto (1883-1951): “You are permitted to use the animals and employ them for work, have dominion over them in order to utilize their services for your subsistence, but must not hold their life cheap nor slaughter them for food. Your natural diet is vegetarian…” ((Quoted in Nehama Leibowitz, Studies in Bereshit (Genesis), Jerusalem: World Zionist Organization (3rd Edition), 1976, p. 77.))

It is also stated in the Talmud that “Adam was not permitted meat for purposes of eating” (Sanhedrin 59b).

Vegetarianism is an aspirational idea within Judaism:

The permission to eat meat after the flood was not unconditional. For example, there was an immediate prohibition against eating blood:

“Only flesh with the life thereof, which is the blood thereof, shall ye not eat.” (Genesis 9:4)

On this Rabbi Samuel Dresner wrote: “The removal of blood which kashrut teaches is one of the most powerful means of making us constantly aware of the concession and compromise which the whole act of eating meat, in reality, is. Again it teaches us reverence for life.” ((Dresner, p. 29.))

Further to the view that G-d originally intended human beings to be vegetarian, many commentators believe that in the days of the Messiah people will again be vegetarians. For example, commenting on Genesis 1:29, Rabbi Joseph Hertz wrote:

“In the primitive ideal age (as also in the Messianic future …), the animals were not to prey on one another.” ((Hertz, p. 5.))

There is a relevant passage in Isaiah:

“And the wolf shall dwell with the lamb,
And the leopard shall lie down with the kid;
And the calf and the young lion and the fatling together;
And a little child shall lead them.
And the cow and the bear shall feed;
Their young ones shall lie down together;
And the lion shall eat straw like the ox….
They shall not hurt nor destroy in all My holy mountain.” (Isaiah 11:6-9)

Isaac Arama (1420-1494) and Rabbi Abraham Isaac Kook, the first Chief Rabbi of pre-state Israel, derive from the above that in the days of the Messiah people will again be vegetarians: “the effect of knowledge will spread even to animals…and sacrifices in the Temple will consist of vegetation, and it will be pleasing to God as in days of old…”. ((Rabbi Alfred Cohen, Vegetarianism from a Jewish Perspective, Journal of Halacha and Contemporary Society, Vol. 1, No. II, (Fall, 1981) p. 45. ))

Rabbi Kook states that a day will come when people will detest the eating of the flesh of animals because of a moral loathing, and then it shall be said that “because your soul does not long to eat meat, you will not eat meat.” ((Joe Green, “Chalutzim of the Messiah-The Religious Vegetarian Concept as Expounded by Rabbi Kook”, pp. 2-3.)) He believes that the high moral level involved in the vegetarianism of the generations before Noah is a virtue of such great value that it cannot be lost forever. ((Rabbi Abraham Isaac Kook, A Vision of Vegetarianism and Peace, chapter 2.)) ((Leibowitz, Studies in Deuteronomy, p. 138.))

Many thanks are due to Professor Richard Schwartz for permission to draw on the text and sources found on his webpage and on the website of Jewish Vegetarians of North America. A fuller discussion of all aspects of the above can be found on this website and associated links.