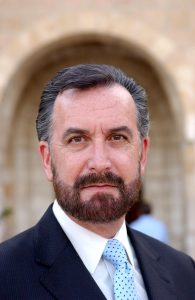 Rabbi David Rosen is International Director of Interreligious Affairs of the American Jewish Committee. Former Chief Rabbi of Ireland, he is Honorary President of the International Council of Christians and Jews and serves on the Executive of the World Council of Religious Leaders. Rabbi Rosen was made a CBE in 2010 for his work promoting interfaith understanding and cooperation.

At 24, my wife (then 22) and I decided to cut out meat. It was another couple of years before we stopped eating fowl; and we gave up eating fish and became lacto-ovo vegetarian in 1979 when we were 28 and 26 respectively. We purchase only free range eggs and Sharon ceased eating dairy foods a few years ago. I still eat a little, but am moving in a vegan direction.

Even as a boy I thought that being vegetarian was the right thing, but was “hooked” on carnivorous consumption. When I became rabbi of the largest congregation in South Africa, in Cape Town (1975) and served on the Cape Beth Din, I had to be part of “spot” checks at the abattoir. What I saw I would not want to do; and it confronted me with the question of whether it is morally acceptable to benefit from something one finds morally repugnant – I decided it was not. In addition, we became aware both of the health hazards of meat consumption, with all the use of antibiotics and the retention/density of toxins at the end of the food chain; and also the cruelty in factory farming (paradoxically far greater than in the past). All this makes the consumption of meat halachically problematic, if not an outright transgression today, especially when we can obtain full nutrition without needing to kill (something that may not have always been the case in the past everywhere). Moreover the abuse of natural resources in the pursuit of the livestock industry, as well as the resultant direct damage to the environment, means that meat consumption also transgresses the prohibition of bal tashchit and exacerbates global poverty and disparity which are also against halachic teaching.

I don’t have one really. I love all my wife’s cooking. One of her specialities is a mushroom pastry bake which is more than delicious.

Probably Hong Kong because of the mix of Chinese Buddhist and Indian Hindu vegetarian restaurants. On the other hand the general environment is probably most friendly in India.

I don’t know if one could call it my “signature dish”, but Sharon’s aubergine wrap is another of her dishes that I love and is one of the reasons I am not yet a vegan!

If available it is preferable to use a non-bitter aubergine that does not require salting.

Half peel and cut the aubergine in strips lengthways. (One decent sized aubergine should provide some six strips which can provide a nice sized first course for three people.)

Lightly fry in a minimal amount of sunflower oil until the strips are soft and slightly brown.

Place them on a paper towel to absorb excess oil.

Cut thin wedges of kashkaval cheese approximately half the length of the aubergine strips and maximal width of the strips.

Wrap the aubergine strips around the cheese wedges.

Pour the sauce on the aubergine wraps, sprinkle grated cheese on top and bake in the oven at 190 degrees for half an hour.

Jewish Vegetarian Society
Close Cookmode
X
Learn about the newest KLBD certified, vegan products, and get discounts on many KLBD products. Join JVS and the KLBD for the virtual vegan roadshow.

To book, please email [email protected] with the subject line ‘KLBD vegan roadshow’. We will email you the Zoom login details a few hours before the event.

– See and hear about the newest KLBD certified products

– Win a KLBD good box delivered to your door!