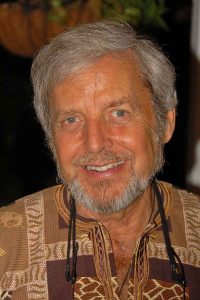 Lionel Friedberg is a producer/director/writer/cinematographer with 18 feature film credits as Director of Photography to his name. He has won numerous awards including a Primetime Emmy, National Emmy, the American Association for the Advancement of Science “Westinghouse” Award for Science Programming, and three Columbus and three Golden Eagles for Best Documentaries. He produced the film A Sacred Duty: Applying Jewish Values To Help Heal The World in 2007.

The very thought that animals were killed for food was always very difficult for me to accept. As a child I saw a chicken being slaughtered and it repulsed me. The final catalyst to my conversion to vegetarianism came when a Hindu friend of mine discussed the concept of karma with me and made it abundantly clear that I was indirectly responsible for taking the life of another creature whenever I ate meat. That did it. I ditched the habit immediately.

I love all food that I intrinsically know is “moral” and untainted by death and suffering. It troubles me that vegetables have to die too, but as physical beings we have to eat but I draw the line at taking the life of an animal.

Probably Millenium in San Francisco, but I have been to excellent vegetarian restaurants in Los Angeles, New York, Chicago and London. (I always try to visit Mildred’s in Soho whenever I’m in London.)

Southern India is by far the most vegetarian-friendly place on the planet but, in the western world, San Francisco is hard to beat.

Making a film on a scientific research ship in Antarctica where vegetarianism was very low on the chef’s list of priorities!

There are many of them but I highly recommend the website, “Vegetarians in Paradise”, run by my good friends Zel and Reuben Allen – vegparadise.com.

Too many to mention, but I do love all tropical fruits and I adore anything that incorporates cucumbers. I have a weakness for potatoes too in any form, although I have to watch my waistline!